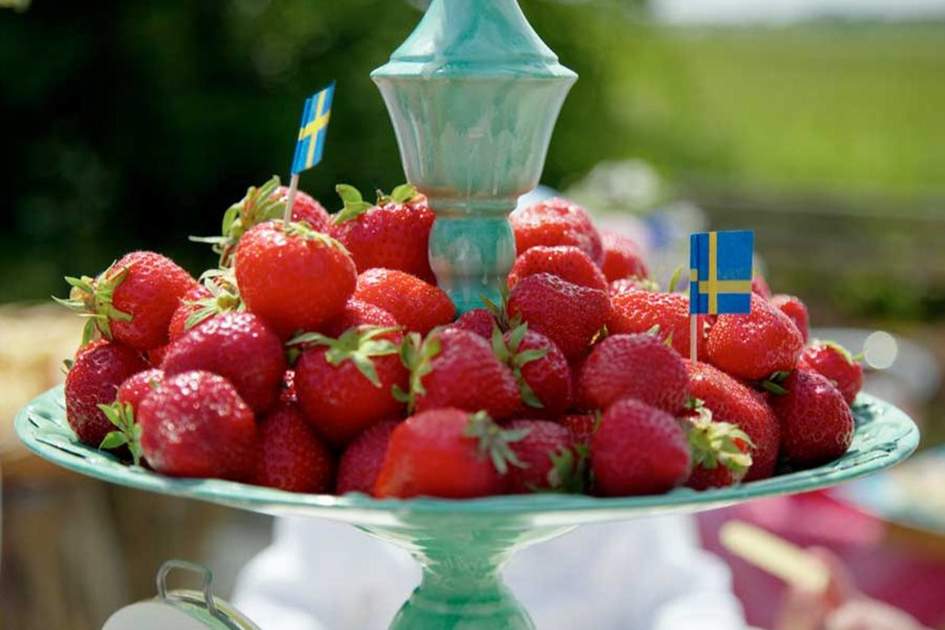 Strawberries for a Midsummer spread

Swedes do like a party but for most of us their way of letting their hair down can seem a rather sedate affair. For most of the year, their idea of a wild night out would barely qualify as a quiet couple of drinks by the standards of London, Glasgow or Dublin. But at midsummer they tend to throw caution to the wind for a weekend of drinking, singing and celebration. If you’re in Stockholm for the midsummer (Midsommar) weekend you may find the streets uncannily uncrowded, because many urbanites quit the city for a break in the country or on one of the islands, where some people still slip into traditional costume, others put flowers in their hair, and most dance and sing along to folk music. It’s all a bit like San Francisco in 1967, with added herring. And schnapps. And more herring. And more schnapps…

“Midsummer is our only real festival in Sweden,” says a Swedish friend, egging me on to knock back yet another shooter of fruit-flavoured brannvin. “For just one day, we don’t have to obey all the rules.” This is anarchy, Swedish style – a very well-behaved anarchy, without the sense of barely controlled chaos that flavours street carnivals elsewhere.

The summer solstice festival goes way back to Sweden’s beginnings. Despite more than a millennium of strait-laced Christianity, it’s riddled with pagan leftovers, from the maypole – yes, it’s a phallic fertility symbol – to the down and dirty drinking songs that traditionally accompany each round of high-octane shots (I still don’t understand the one about the little frog).

If you’re in Stockholm on midsummer weekend and looking to party, but not fortunate enough to have an invitation from a Swedish friend with a country cottage, a yacht, or an island cabin, one place to head for is Skansen, Stockholm’s huge open-air museum, which comes alive with music and traditional celebrations and where you can help the Skansen folk dance team raise and decorate the flower-covered maypole. Dressing up in old-timey costumes is still part of midsummer celebrations at Skansen, where you’ll meet people in the distinctive dress of Sweden’s many regions (long pinafore dresses for women and knee-britches and white stockings for men are standard elements of the old-style wardrobe).

Skansen is also a great place for a picnic, and because many of the city’s shops and restaurants will be closed over the weekend, it’s not a bad idea to stock up with snacks (and, of course, beer and akvavit) before the weekend-long celebrations kick off.

In the city centre itself there is usually a line-up of bands – don’t expect international names – that bring areas such as Kungstradgarden to life at open-air concert venues, and stalls and entertainment along the waterfront facing the Royal Palace.

On that night, the sun won’t set until almost 10pm. On Monday morning, it will rise before 4am. A few hours later, Swedes will wake up, still a little hungover, and go back to living, politely, by the rules. But in the meantime, it's party time!