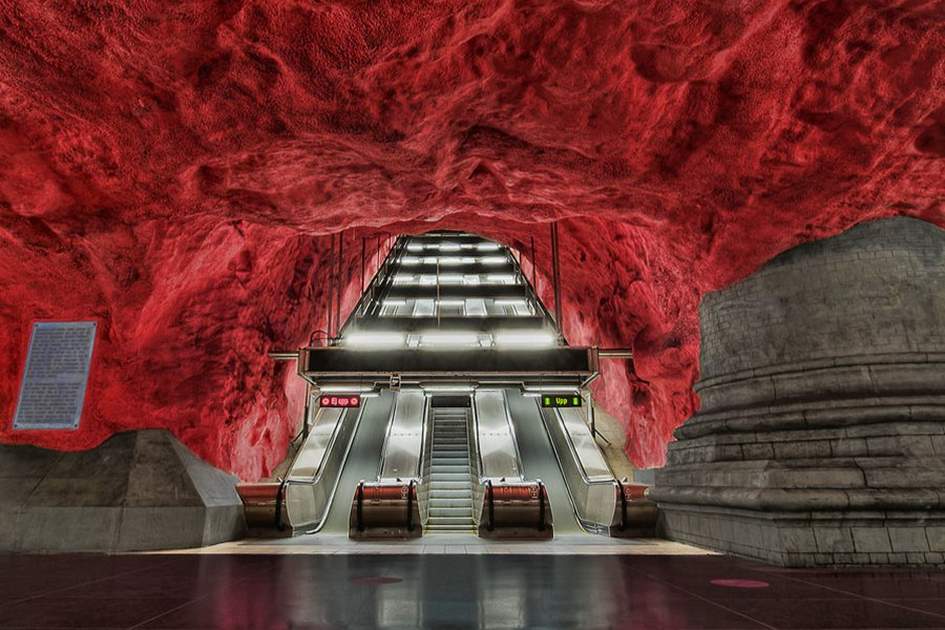 It’s hard to understand what inspired Swedish engineering designers to cover the walls of Stockholm’s underground system with paintings at a time when every other country was lining theirs with shiny, cream tiles. It has, however turned Stockholm underground, the Tunnelbanan, into much more than a mere means of transportation. Down the escalators is a world of caverns full of colour, texture and shape, giving Stockholm the world’s longest art gallery at 110 km. Booking halls, ceilings, platforms and track walls offer an endless variety of styles and colours – all for the price of a ticket. Since the 1950s, more than 90 of the 100 stations have been decorated with paintings, sculptures, mosaics or engravings and more than 150 artists have contributed to the project.

T-Centralen, the hub of the network, became home to the first embellishments in 1957: Egon Möller-Nielsen constructed terrazzo sofas on the upper platform; track walls were decorated by other artists with white clinkers and figures in ceramic material, as well as glass prisms of varying colours and patterns. A year later, Tom Möller’s tile decoration Goat appeared in Hammarbyhöjden (line 19).

Native Stockholmers are prone to arguing about which is the best line for paintings, but the route out to Akalla (line 11) is a strong contender. The train leaves from T-Centralen’s lower platform, and to go down the second escalator is to enter a deep mysterious cave-like space. The platform and tracks have been tunnelled out of natural stone, left in its rough-hewn form, and covered with huge blue leaf fronds on a white-and-blue background.

As you pass the various stations, look also at Västra Skogen with an 18-metre (60ft) human profile in terrazzo, tile patterns and cobblestones. But the highlight on this line must be Solna Centrum, which deserves a special stop. Green hills and forests form the backdrop to the rail tracks, silhouetted against red. The scene shows a man playing an accordion; the longer you look at the work, the more you will find. This environmental theme, Sweden in the 70s, was completed in 1975 by Karl-Olov Björk and Anders åberg. 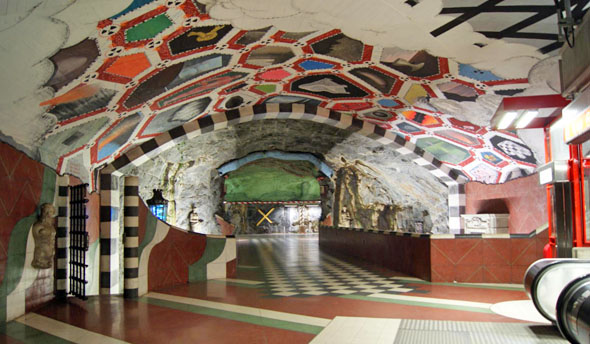 On the other branch of this line (10) is Tensta, one of the larger immigrant communities, with some 30 different nationalities represented. The paintings show a Tribute to the Immigrants. But many think the most interesting station on this line is Kungsträdgården, which has two beautiful entrances. Other more unusual exhibits are the Green Bird sculpture at Rågsved (line 19), the scientific, engineering and mathematical symbols of Tekniska Högskolan (Royal Institute of Technology, lines 15 and 24), and the fantasy beetles in glass cases at Gärdet (lines 13 and 14). The theme of Women’s Liberation, The Peace and Green Movements at östermalmstorget (lines 13, 14, 15, 24) shows the Swedes’ early interest in grassroots movements and equality for women. At Vällingby (lines 17 and 18) Casimir Djuric has turned the platform pillars into giant trees.

Styles vary widely from station to station, as there are often several decades between the different creations, but the idea behind the project – to make art more accessible to the public - remains key to this day. More surprises will no doubt follow in years to come.