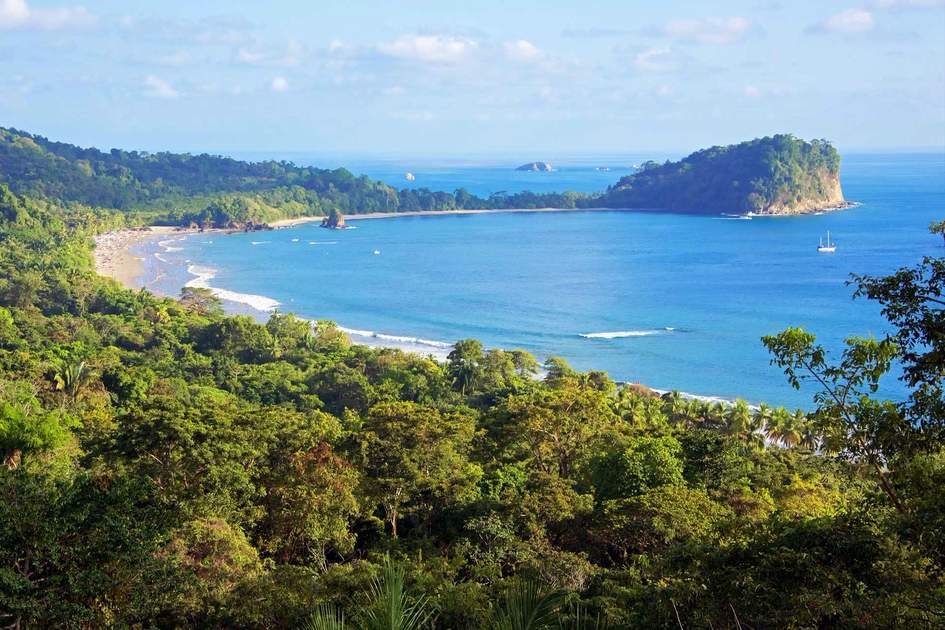 In Costa Rica, the coastline is never far away. The country’s Caribbean coast is just 220km (135 miles) long, while its Pacific coast, encompassing two major peninsulas: the developed Nicoya Peninsula to the north, and the more remote Osa Peninsula to the south, is several times that length. Both the Caribbean and the Pacific coastlines encompass numerous beautiful beaches.

Mangroves are the natural vegetation of coastal swamps throughout the tropics. The five species of mangrove in Costa Rica cover extensive stretches of both the Caribbean and Pacific shorelines. Apart from these mangrove swamps, Costa Rica’s coastline consists largely of expansive beaches – often of dark volcanic sand – punctuated by low-lying rocks and a sprinkling of offshore islands.

Costa Rica also has a number of small coral reefs on its Pacific coast, and one significant reef on the Caribbean side, at Cahuita. Unfortunately, in recent years, almost all of the country’s reefs have become threatened by deforestation, which has increased silt levels in Costa Rica’s coastal waters – reef-building corals can only survive in clear water.

Despite increasing pressures from development, Costa Rica is striving hard to retain its status as one of the world’s greenest countries, with official moratoriums on building and increased scrutiny of proposed projects along the coasts. 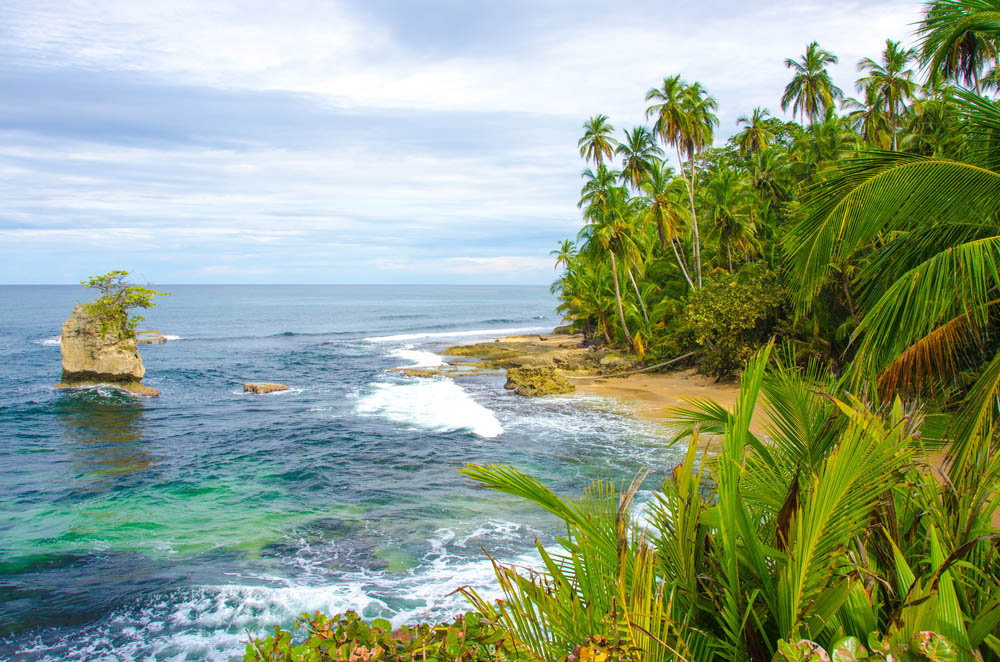 The best beaches in Costa Rica

The village of Nicoya on its namesake peninsula on Costa Rica’s Pacific coast is the gateway to the relatively remote Nosara Beach, popular with travellers who prefer a calmer alternative to the high-octane tourist scene further north. The star attractions here are the idyllic Playa Pelada and Playa Guiones, two long white-sand beaches bordered by shady trees and tendrils of green sea grape edging the tideline. The several kilometres of pristine sands offer surfing, swimming and spectacular sunsets, as well as yoga-on-the-beach.

To the east of the town of Puerto Viejo, is blissful Punta Uva, arguably the best and most easily accessible beach along Costa Rica’s Caribbean coast. Transparent, aquamarine water laps gently on the palm-fringed sands, while both the air and sea temperatures seem fixed at a constant, idyllic 27°C (80°F). This beach also offers some of the finest snorkeling on the coast, with a healthy reef within easy swimming distance, just metres offshore. In addition, it is the only Caribbean beach where you can watch the sunset – as the beach actually lies facing in a westerly direction. 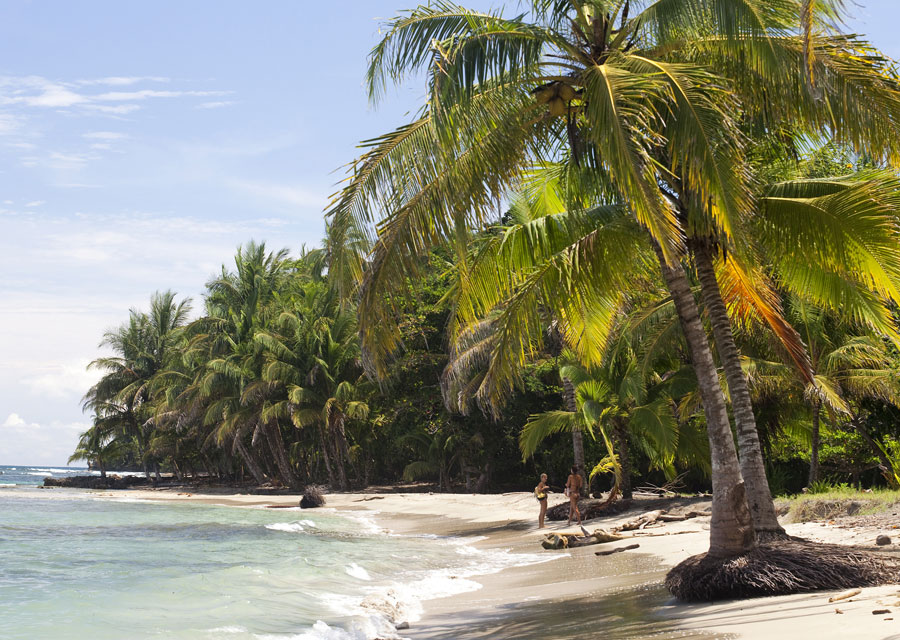 Punta Uva is one of the finest beaches on Costa Rica's Caribbean coastline. Photo: Shutterstock

A short drive from Punta Uva, or an hour’s stroll along the sands, Manzanillo is a tiny fishing village with an expansive golden sandy beach fringed with palm trees. Coral reefs offshore create a natural harbour, making the water as calm as a lake in the early morning and late afternoon – ideal for swimming, while surfers also enjoy riding the fast beach break waves.

Locals sit at painted concrete garden tables and benches, children play in the surf and youngsters play soccer on the flat sands of the beach, as elderly people chat quietly in the shade. Except for the busloads of day-trippers who arrive from Limón on Sundays, not much else goes on here. This is Costa Rica at its most relaxed. 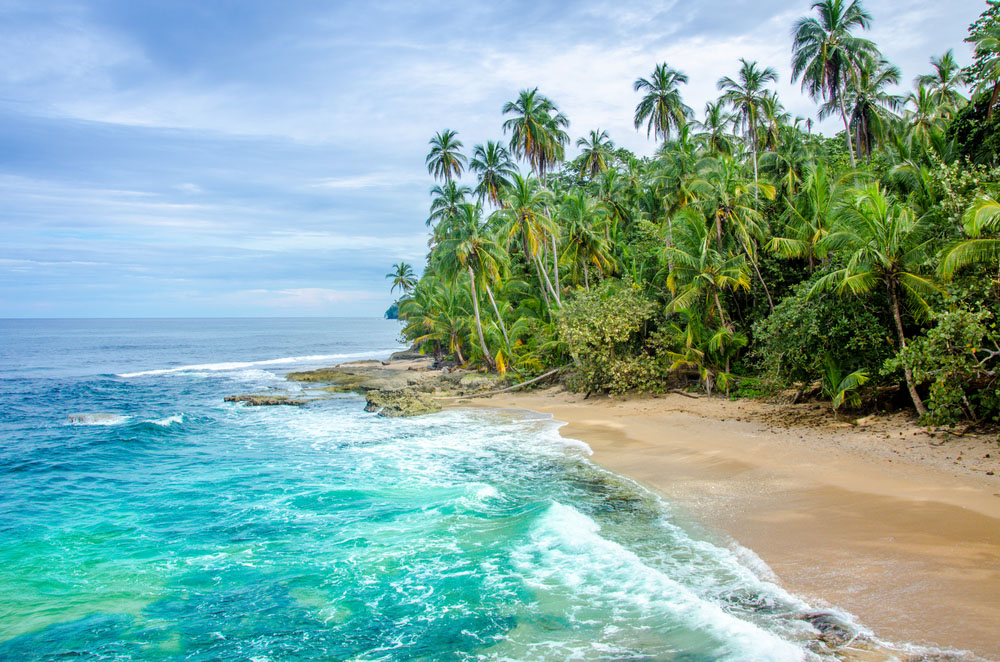 Manzanillo Beach is one of the most relaxed in Costa Rica. Photo: Shutterstock

On the southern coast of the Nicoya Peninsula, the bohemian resort town of Montezuma offers a row of funky hotels, trendy restaurants and cantinas on the beachfront. Lodging and dining options here range from simple to upmarket, while the beach-going is exceptional. To the north of town there are wide, sandy beaches, with beautiful clear water. The first couple of rocky bays have strong currents, but Playa Grande is safe for swimming. A scenic footpath leads 6km (4 miles) north to a dramatic waterfall that cascades into a pool right on the beach. To the south, the surf crashes against volcanic rock, while a short hike away up a river, there is another waterfall with a pool for swimming. Avoid the temptation to dive in – recent years have seen a number of accidents when young men have plunged head-first into the rocky pool. 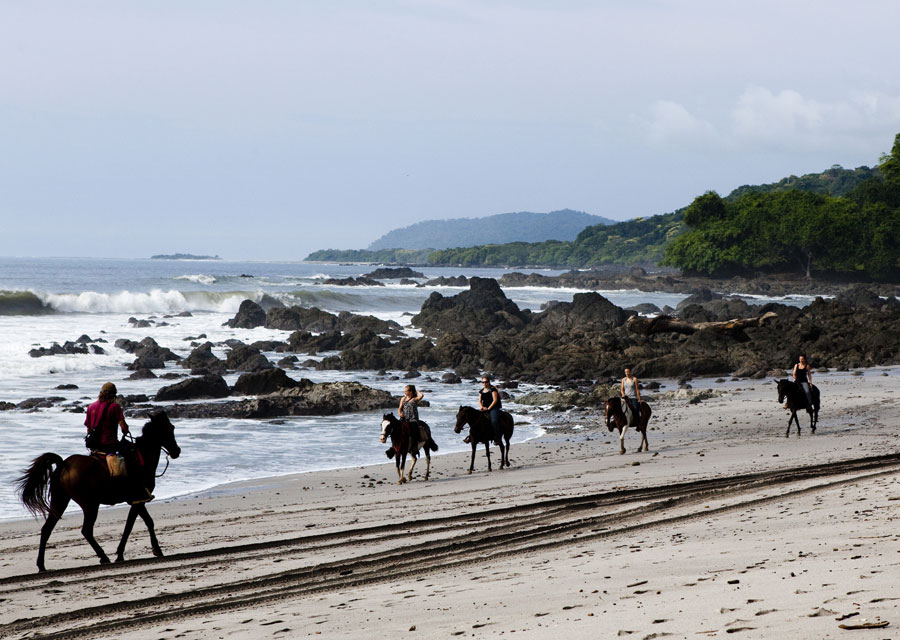 Visitors can ride on horseback to nearby waterfalls from Montezuma beach. Photo: APA

On Costa Rica’s central Pacific coast, Parque Nacional Manuel Antonio encompasses three long strands of magnificent white sand, fringed by jungle and the ocean, along with 7 sq km (3 sq miles) of forest. The clean wide beaches are backed by high cliffs covered in dense jungle vegetation. Playa Manuel Antonio is the most beautiful beach, as well as being the safest for swimming. If possible, visit during the week as the beaches can become crowded at weekends. Early morning is the best time, when less tourist groups have arrived and animal sightings are easiest. Hiring a licensed naturalist guide at the entrance will greatly increase your chances of spotting wildlife in the park, which includes sloths, capuchin monkeys and abundant species of birds. 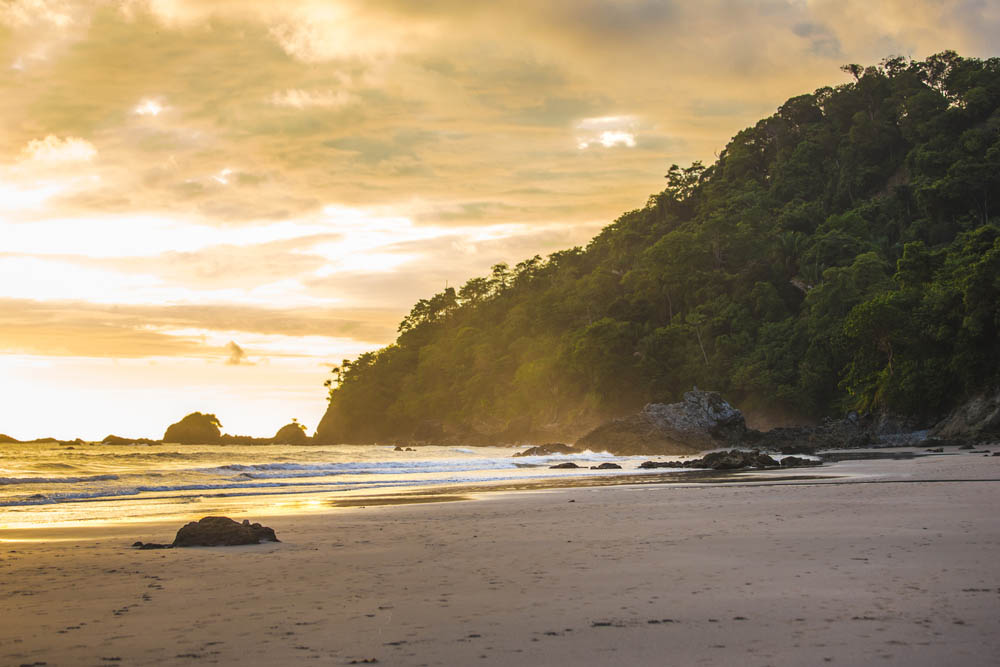 Manuel Antonio Beach is one of the wildest in Costa Rica. Photo: Shutterstock

A surfer’s dream destination, with up to eight prime spots for catching waves, Playa Tamarindo on the northern coast of the Nicoya Peninsula is also known for its raft of stylish restaurants and lively nightlife scene. Some relatively affordable lodgings are still available in the village of Tamarindo, but the lush and lovely Hotel Capitán Suizo is the most luxurious in town and benefits from its prime location, right on the beach at its southern end. Multiple international dining options are available in town, but for a quieter evening, Playa Grande is just a 5-minute boat ride across the Tamarindo estuary. Also famous for its surfing waves by day, Playa Grande is a major leatherback turtle nesting habitat by night and the beach itself is protected. 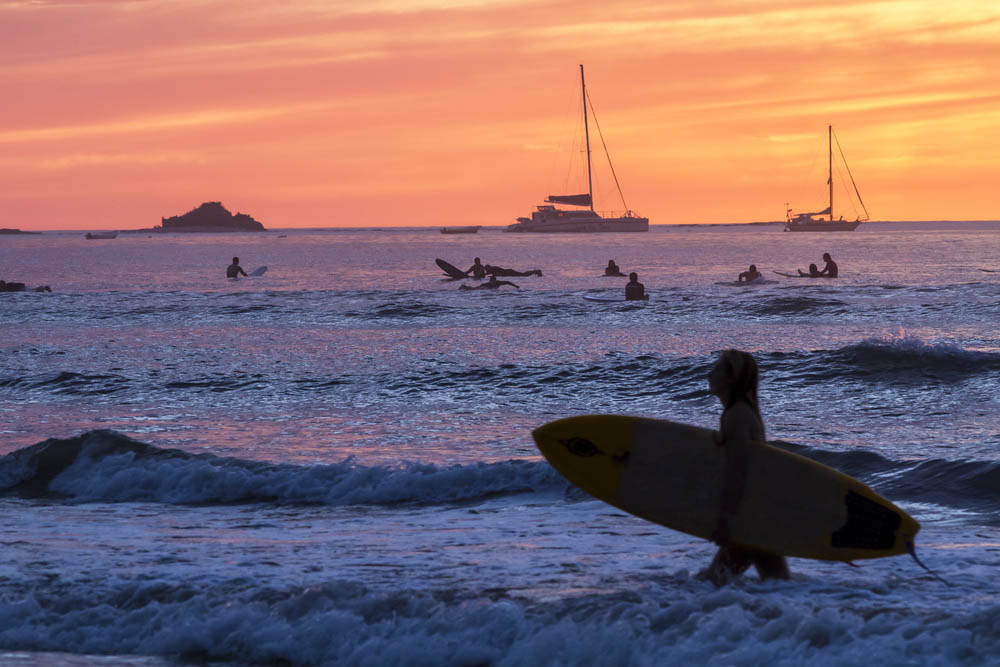 On the Pacific coast of Guanacaste Province, Playa Hermosa is a sparkling half-moon cove with gentle surf. This peaceful, family-friendly beach has warm, safe water for swimming and is perfect for sunset cruises. Despite some large-scale development at the northern end, the beach still has plenty of charm as well as some excellent small restaurants and hotels. It is also a major diving centre offering a number of quality outfits, including the long-established Sirenas Diving Costa Rica with a boat located in the neighbouring Playa del Cocos bay.

Ready to take a trip to Costa Rica?

Our local experts can help you plan and book fantastic tailor-made trips to Costa Rica. Simply contact us to let us know your ideas for the trip and when you would like to travel. We will then prepare a personalised itinerary especially which you can amend until you're totally happy with every detail before booking. Seek inspiration in our existing Costa Rica itineraries, and keep in mind that all our planned itineraries can be fully tailored to suit your specific needs.