Tibet is one of the world's great travel frontiers – fabulously remote, exotic and otherworldly – and visitors' high expectations will be matched by the experience of discovering this high-altitude region. Read on for our selection of seven amazing things to do in Tibet 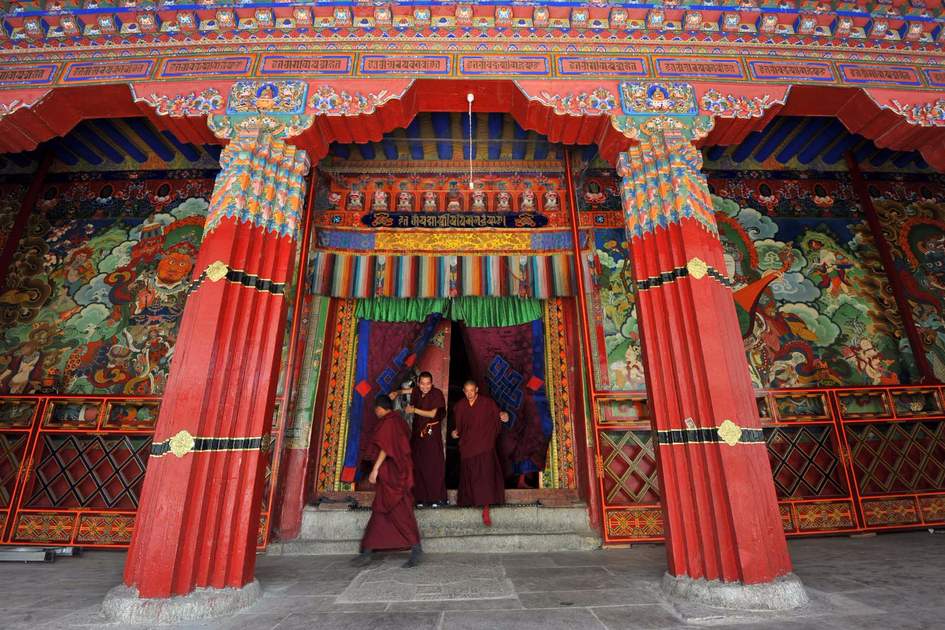 Visiting the fabled Roof of the World remains one of the great travel adventures of our times. Tibet’s unique landscape and high altitude environment still exercise a powerful hold on the imagination, and the idiosyncratic religious culture still casts an undeniable spell. Below, we reveal the seven must-see highlights of a trip to this evocative region

1. Marvel at the Potala Palace

The only sizeable city in Tibet, and centre of Tibetan Buddhism, Lhasa lies at a dizzying altitude of 3,680 metres (12,070ft) on the banks of the Lhasa He (Kyichu). Lhasa will be your base when you visit Tibet on our incredible trip: China and Tibet – An Unforgettable Adventure where you'll explore the city's fabulous sights.

Crowned by golden roofs visible from far and wide, your first stop should be the Potala Palace, a huge, dramatic building, symbol of Tibet and residence of the Dalai Lamas from its completion in the 1640s until 1959. The section known as the White Palace (Potrange Karpo) was built first; the smaller Red Palace (Potrang Marpo), which houses almost all the items of interest, was completed 50 years later. The entire palace covers an area of almost 400 metres (1,300ft) from east to west, and 350 metres (1,150ft) from north to south.

Within the Red Palace are the great ceremonial halls, 35 small chapels, four meditation halls, and eight vaults for deceased Dalai Lamas. The most splendid and valuable vault is for the fifth Dalai Lama, decorated with 4 tonnes of gold, and innumerable diamonds, turquoise, corals and pearls. In the northeastern part of the palace is the chapel of Avalokiteshvara, considered the oldest part of the structure and said to have been preserved from the original palace of King Songtsen Gampo. The chapel contains a statue of the king with his Chinese wife, Wen Cheng, and his Nepalese wife, Bhrikuti. There is a tremendous view down into the valley and the Old City from the roof of the Red Palace.

2. Join the pilgrims at Jokhang temple

After visiting Potala Palace on Day 8 of our trip, you will progress to the holiest of all Tibetan religious sites, the Jokhang temple. This is at the epicentre of the Tibetan world and the heart of Lhasa, the destination for devout pilgrims from across the land. Pilgrims prostrate themselves in the dust outside the temple; others continuously turn their prayer wheels and chant mantras.

Enter the incense-filled interior by walking through a prayer hall supported by red columns. The main building, built on a square mandala foundation, dates all the way back to the 7th century, when it was built as a shrine for a Buddha statue that the Chinese princess Wen Cheng brought to Lhasa as a wedding gift from the Chinese emperor. This Buddha, called Jobo in Tibetan, gave the temple its name: Jokhang, the hall of the Jobo Buddha. Four gilded roofs mark the holiest halls: the chapels of the Jobo Buddha, Avalokiteshvara and Maitreya, and the chapel of Songtsen Gampo.

The golden Jobo statue is richly dec­orated with jewels and usually covered with brocade and silk bands. At the feet of the Buddha, lamps made of heavy silver and filled with yak oil burn continually. It is not certain whether the statue is actually the original from the 7th century, since other artefacts were destroyed during the Cultural Revolution and later replaced with copies. 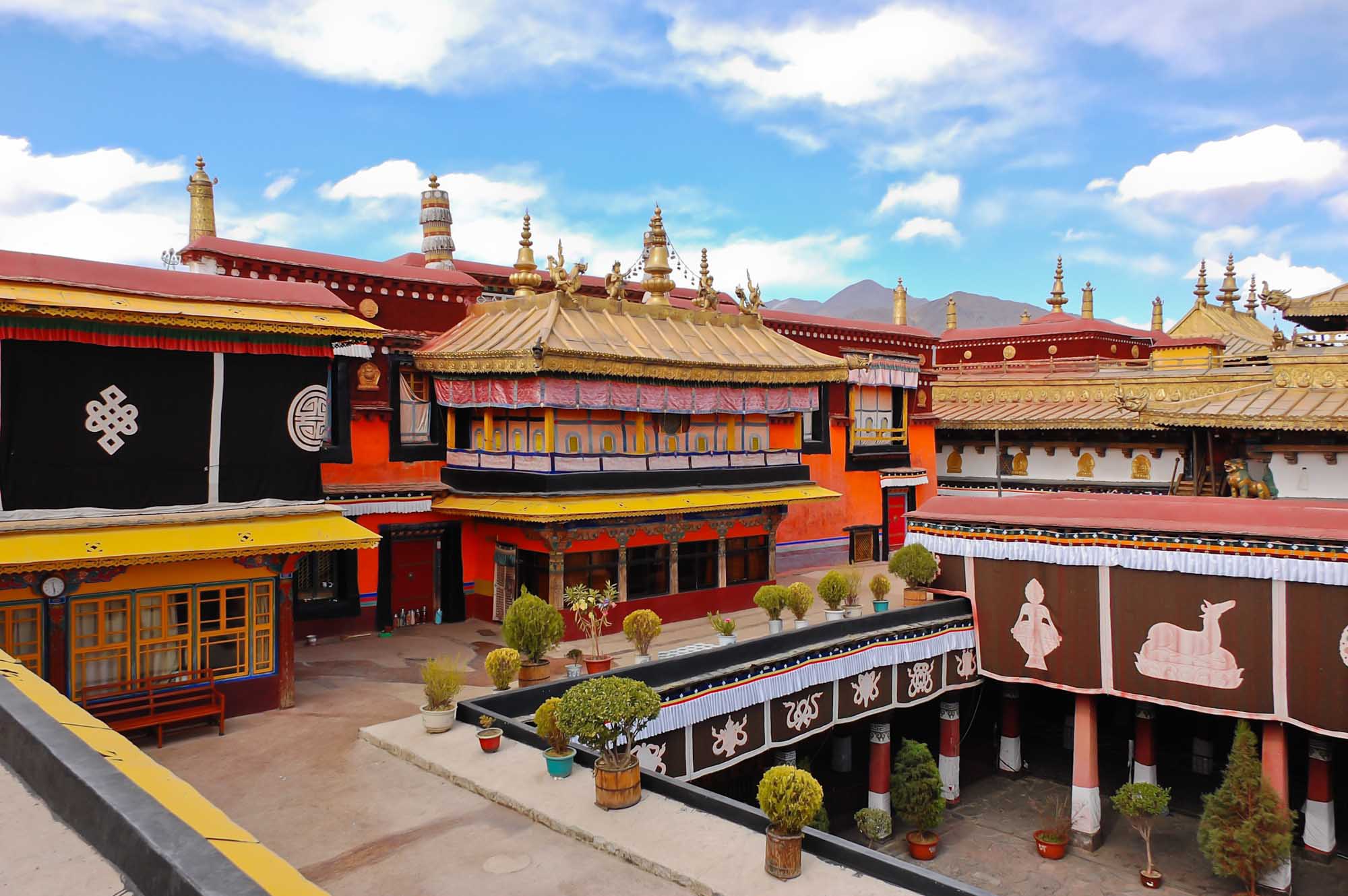 Three great monasteries near Lhasa are considered to be important centres of the Yellow Hat sect and pillars of the theocratic state: Drepung, Sera and Ganden. Day 9 of our China and Tibet trip takes you to the first two.

Just 5km (3 miles) north of Lhasa, at the foot of the chain of mountains dominating the Lhasa Valley, Sera Monastery was built in 1419 by a pupil of Tsongkhapa, at a place where his great master had spent many years studying and meditating in a small hut. During its most active period, almost 5,000 monks lived here, and it had a brilliant reputation because of its famous academy. Today, Sera is home to around 300 monks.

Drepung Monastery, built in 1416, was for a long time the political headquarters of the Yellow Hat sect. The predecessors of the Great Fifth Dalai Lama lived here before moving to the Potala. The tomb stupa of the second, third and fourth Dalai Lamas are housed in Drepung. Probably the largest monastery in the world at the height of its power, nearly 10,000 monks are said to have lived within its walls. The lower part of the site is occupied by hermitages for the monks, along with numerous storerooms. Further up are prayer halls and dukhang, which contain valuable statues and documents.

4. Take in the view from Yumbulakhang

A further 5km (3 miles) south into the Yarlung Valley heartlands is the ancient and spectacular site of Yumbulakhang, which looks as if it grew out of the peak of a hill. Home of the Yarlung kings (AD 627–842), it is thought to have dated from a much earlier period, possibly around 130 BC and the first Tibetan king, Nyatri Tsenpo. Sadly, it was reduced to ruins in the Cultural Revolution and most of what stands today is a 1980s reconstruction. There is a superb view across the valley below, whose fields have been cultivated for over two millennia. Don't forget your camera – there are views aplenty here. Talk to our local expert today to add a visit to Yumbulakhang to your trip itinerary. 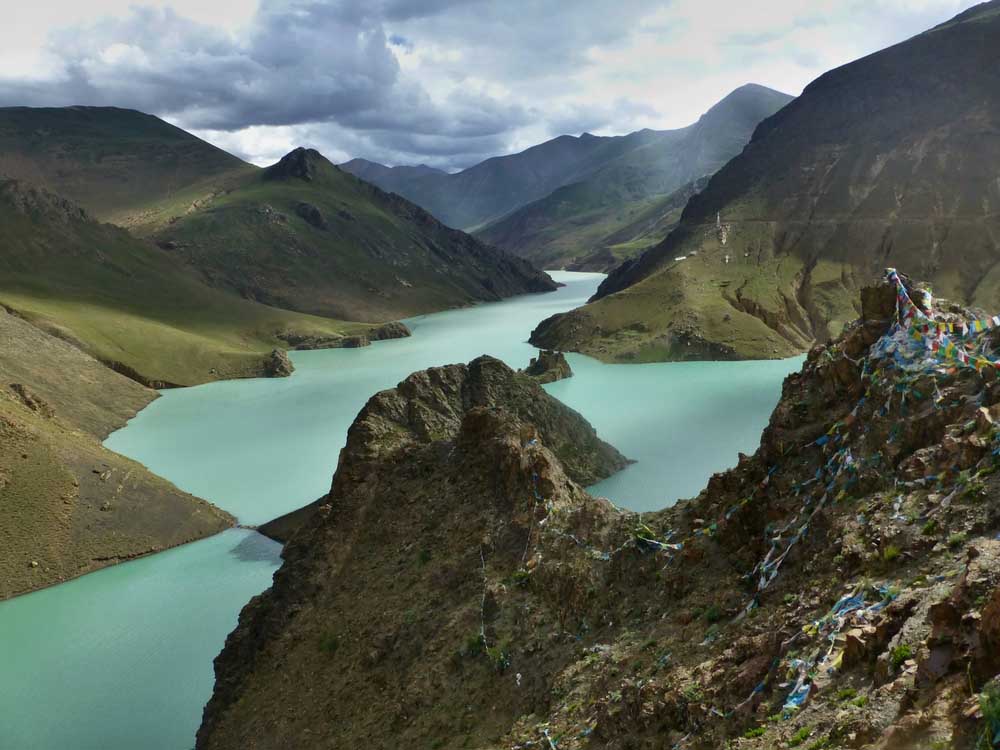 Yamdrok Tso is one of Tibet's sacred lakes and the largest in Southern Tibet, comprised of brilliant turquoise freshwater and surrounded by mind-blowing scenery including gentle pastures and snow-capped mountains. Day 10 of your journey will take you here to wonder at the colours and wander the lake shore, perhaps enjoying a fish lunch. Lake Yamdrok is revered as a talisman, considered to be home to deities that form part of the life-spirit of Tibet, and with such a beautiful setting, it's not hard to believe. Legend has it that if the waters dry, it means Tibet is no longer habitable.

The lake also attracts migratory birds, making it a great place to bird-watch during the winter.

Tibet’s oldest monastery, Samye makes a fas­cinating trip. Part of the appeal is the ferry across the Yarlung Tsangpo River from a point 35km (20 miles) west of the town of Tsedang; on the opposite bank, a lorry carries travellers to the monastery in about 30 minutes.

Samye was founded by the Indian teacher Padmasambhava around AD 770. Considered to be the founder of Tibetan Buddhism, he is said to have succeeded in winning over the demon gods of the Bon religion – many of the demon gods in Tibetan monasteries refer back to such Bon gods. The site has been built on a mandala foundation and reflects the cosmic view of Tibetan religion. The main temple stands in the centre and symbolises the mythical Buddhist peak of Mount Meru, while four smaller chapels were erected on the four cardinal points of the compass. You can easily add an excursion to Samye to your itinerary with Insight Guides.

7. Take a trip on the world's highest railway

To hasten Tibet’s development, China has built the world’s highest railway, linking Lhasa with the Chinese rail network. The train carriages are pressurised and feature individual oxygen tubes that can be inserted into passengers’ noses in the event that altitude symptoms are felt. Beijing hailed it as an engineering marvel, it is the latest in a long line of colossal Chinese construction projects – roughly half of the line has been built on permafrost, with bridges spanning the most unstable sections of frozen ground. In areas prone to melting, cooling pipes have been embedded into the ground to ensure it remains frozen and to stabilise the tracks. At its highest point, the Tanggula Pass, the tracks climb to 5,072 metres (16,640ft), making it the world’s highest rail crossing. Don't look down...

Ready to plan your amazing adventure in Tibet?