Across The Bridge: Copenhagen and Malmö 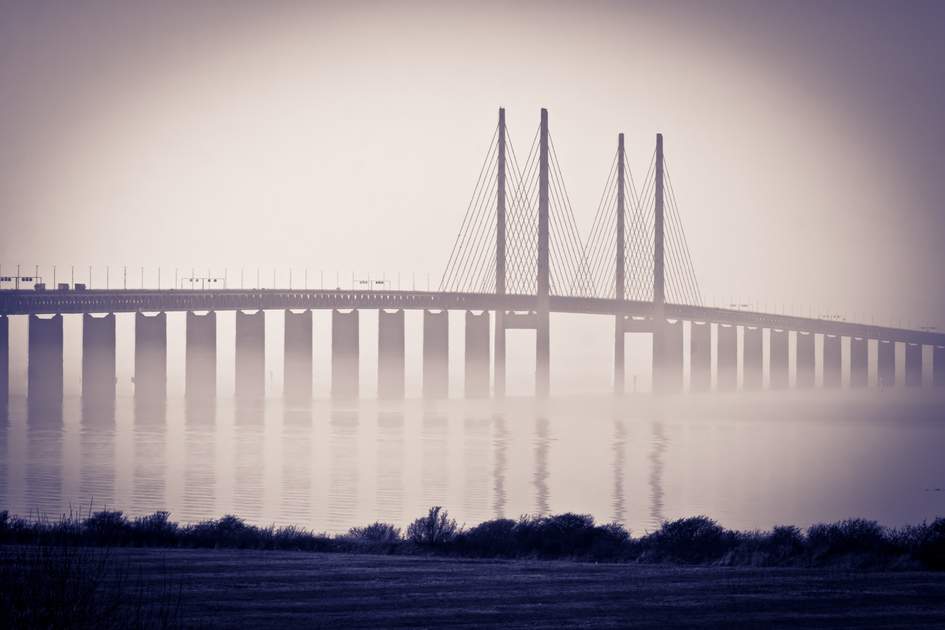 The bridge, oresundsbron, between Denmark and Sweden

Forget The Killing, Wallander and Borgen – the latest in the wave of Scandi-crime exports to grace UK TV screens is BBC4’s The Bridge. In the first episode a body (actually, two bodies sawn in half!) is found on the øresund Bridge, which links Danish capital Copenhagen with Malmö in Sweden. Cops from both countries must work together to investigate the crime. And non-Scandinavian viewers must stay super alert to keep track of when the action switches from Malmö to Copenhagen and back to Malmö again!

We’re so gripped by the show that it’s inspired us to make a list of our favourite things about the fantastic cities at either side of the 8km bridge. The charms of Copenhagen are well-known, but lively Malmö, Sweden's third-largest city, is also well worth discovering. And best of all, you don’t have to pick between the two – the bridge that gives the show its name makes getting between the two cities a breeze.

Top 5 things to do in Copenhagen

A good way to get a first feel of Copenhagen is from the water. Take one of the 60-minute canal boat trips from Kongens Nytorv/Nyhavn or Gammel Strand.

Denmark’s most popular attraction is this charming amusement park, opened in 1843 and still retaining the air of a pleasure garden from a bygone age.

At the narrow waterway of Nyhavn, colourful old wooden schooners line the quay, and the north side is a charming combination of sailors’ bars and new restaurants.

Copenhagen boasts the most Michelin stars of any city in Scandinavia. Try Noma in Christianshavn, twice voted the best restaurant in the world. There’s even a pop-up branch opening at Claridge’s in London during the Olympic Games.

The country’s most visited museum, with unique treasures such as the golden Chariot of the Sun, the enigmatic Gundestrup Cauldron and Egtved Girl.

Top 5 things to do in Malmö

Malmö’s exciting new cultural hub is a former power station that now contains one of the most comprehensive 20th-century art collections in Scandinavia.

The "Little Square" is a particularly idyllic place to sit and relax, with its cobblestones, carefully restored houses and 16th-century charm. It is also home to the Form/Design Center, where Swedish industrial design and handicrafts are displayed.

Malmö’s most impressive modern building is Sweden’s tallest at 190m (620ft). This unique structure, which twists 90° from bottom to top, has revitalised the West Harbour area of the city. Viewers of The Bridge won't fail to have noticed this twisty silver protuberance on an otherwise low-rise skyline.

Scandinavia’s oldest remaining Renaissance castle houses the Malmö Museer, which include the Art Museum, history exhibitions, an aquarium, the Science and ­Technology/Maritime Museum and the Commander’s House.

Built in the Baltic Gothic style and dating from the 13th century, this elegant cathedral features a beautiful altar area created by sculptors in 1611.

Getting between Copenhagen and Malmö

Trains cross the øresund Bridge between Malmö and Copenhagen’s central stations 24 hours a day; every 20 minutes during the day and once per hour from 11pm–6am. The journey takes 35 minutes and you can buy your tickets at the stations. The train also calls at Copenhagen Kastrup airport.

The memorable 45km (28-mile) journey along the E20 and over the bridge takes 45 minutes. You’ll need to pay a toll on the Swedish side, whichever city you’re coming from. You can pay by cash or credit card.

Bus 999 runs between Malmö and Copenhagen every hour during the day (not Sundays). In Copenhagen it calls at locations including Kastrup airport and the Town Hall Square; in Malmö the stops include the Concert Hall and Södervärn.

To find out about these two cities and more, check out the new edition of Insight Guide Scandinavia, the perfect travel guide to this beautiful and fascinating corner of Europe.

Discover more of Scandinavia from our blog

Take a look at our articles on the best film and TV locations you can visit in Scandinavia, staying in Swedish Lapland, Norse folklore, the iconic Moomin stories, experiencing art on Stockholm's subways, (Denmark's alternative city) Christiania and sleek Scandinavian design.