Feeling like a fairytale world all of its own, yet situated just a 45-minute journey by car west of Lisbon, the dreamlike castles, lush forests and breathtaking mountain views of the resort town of Sintra make for the perfect side trip from the Portuguese capital. 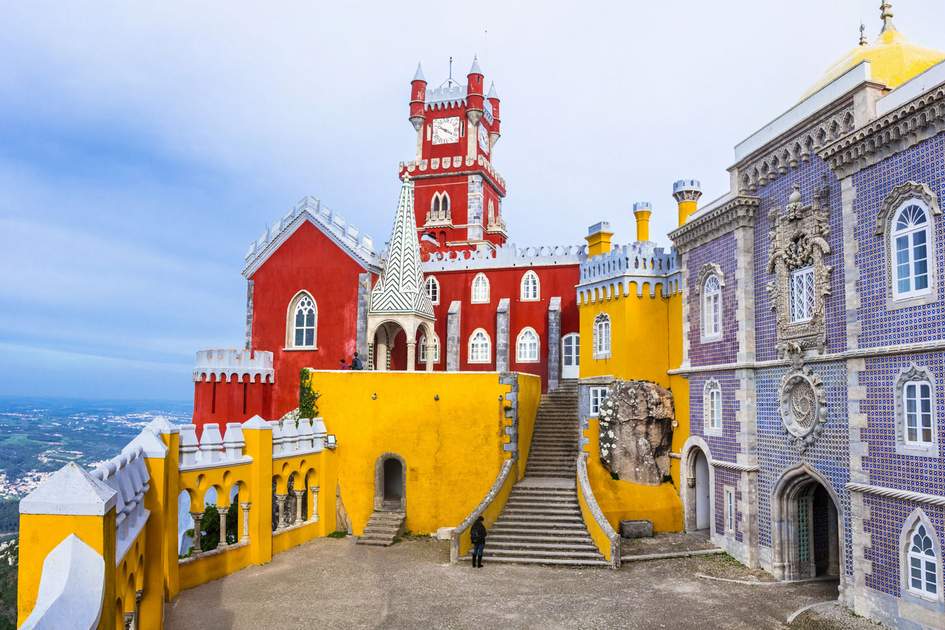 There is, perhaps, nowhere else in Portugal which has captured the imaginations of travellers, poets, artists and kings like the magical mountain city of Sintra. The Romans knew this area as the Mountains of the Moon, and the landscapes are certainly otherworldly – thick, dark forests of oak blanket the mountainsides, shrouded in perpetual mist and broken up by vast, smooth boulders as large as cars. The locals will tell you that Sintra’s magic is ingrained in its landscape; that, like a Portuguese Glastonbury, this is a crossroads of powerful ley lines, where the earth is imbued with special magnetic properties. It’s even said that phone batteries drain quicker than usual here, and that light bulbs shatter with alarming regularity. 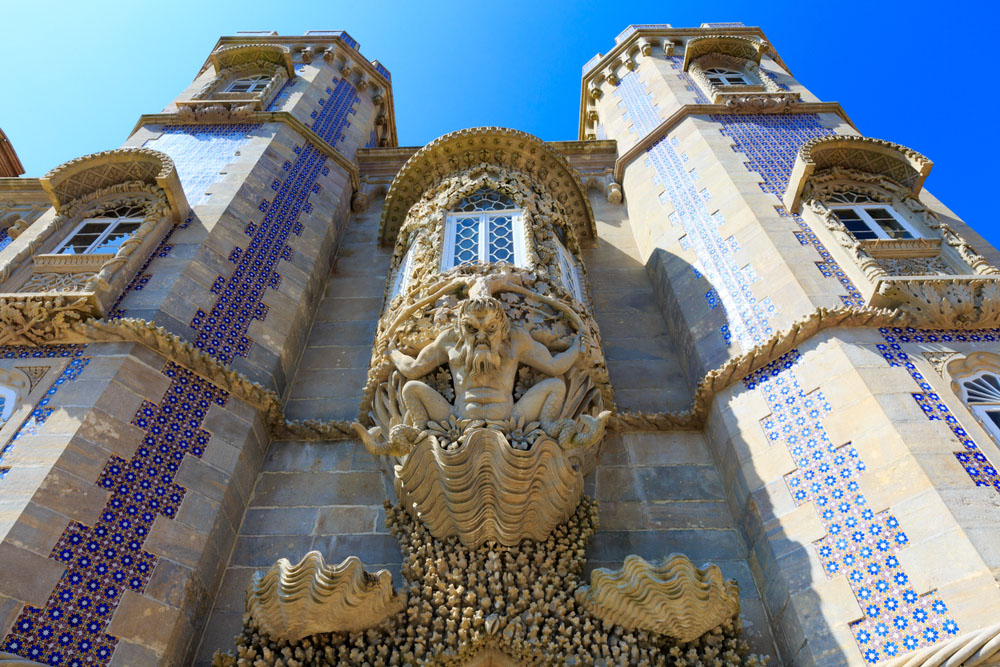 Whether because of the enchanting landscapes or the cool mountain climate, Sintra became a favourite summer retreat for rulers throughout the ages, who built a number of fantastical palaces in the town and surrounding wooded hills. To this day, the historic centre of the town is dominated by Sintra National Palace, a whitewashed, red-roofed masterpiece which served as a retreat for Portuguese kings for the best part of a millennium. Most of what you see today dates from the 15th and 16th centuries, including the two vast conical chimneys which rise above the palace’s kitchens. 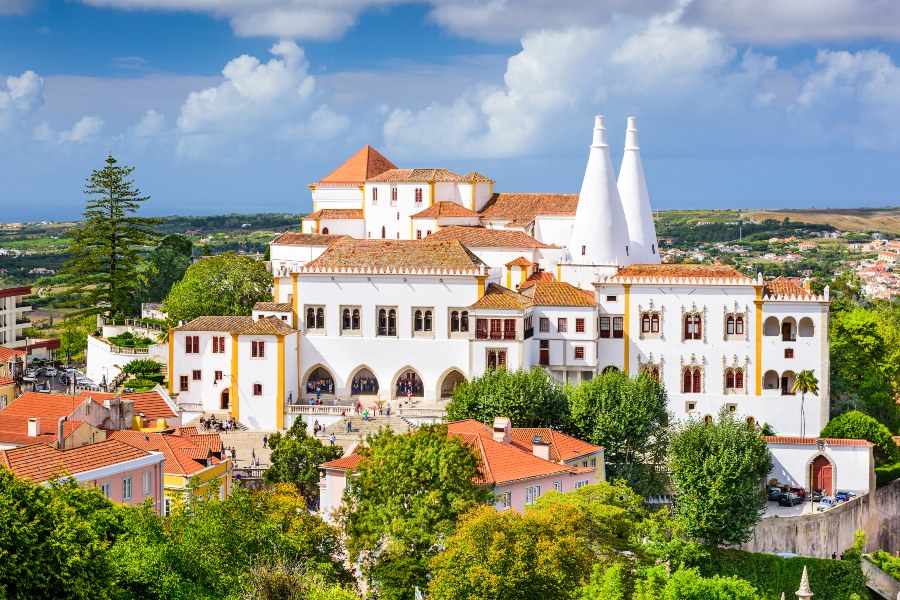 The most famous of Sintra’s landmarks is the Palácio da Pena, which sits high on a hill above the town. Crowned with turrets, domes and battlements, and painted in alternating blocks of blue, yellow and red, it looks like several different palaces thrown together, an amalgam of styles in keeping with the wild exoticism of the mid-19th century when it was built. The German composer Richard Strauss, upon setting eyes on Pena for the first time, declared, 'Today is the happiest day of my life. I know Italy, Sicily, Greece and Egypt, and I have never seen anything, anything to match Pena. It is the most beautiful thing I have ever seen.'

Aside from the technicolour exterior, lavish apartments and grand dining rooms of the palace itself, Pena’s sprawling grounds are a wonderful place to spend an afternoon. Landscaped in the style of a traditional English woodland garden, the Parque da Pena is populated with hundreds of exotic plants species from every corner of the earth, including American sequoias, Chinese gingko trees and New Zealand ferns. Also within the grounds is the Chalet of the Countess of Edla – known, fittingly, as the House of Indulgence – which, with its wood-panelled walls crawling with creepers and ornamental cork, contributes to the fairytale feel. 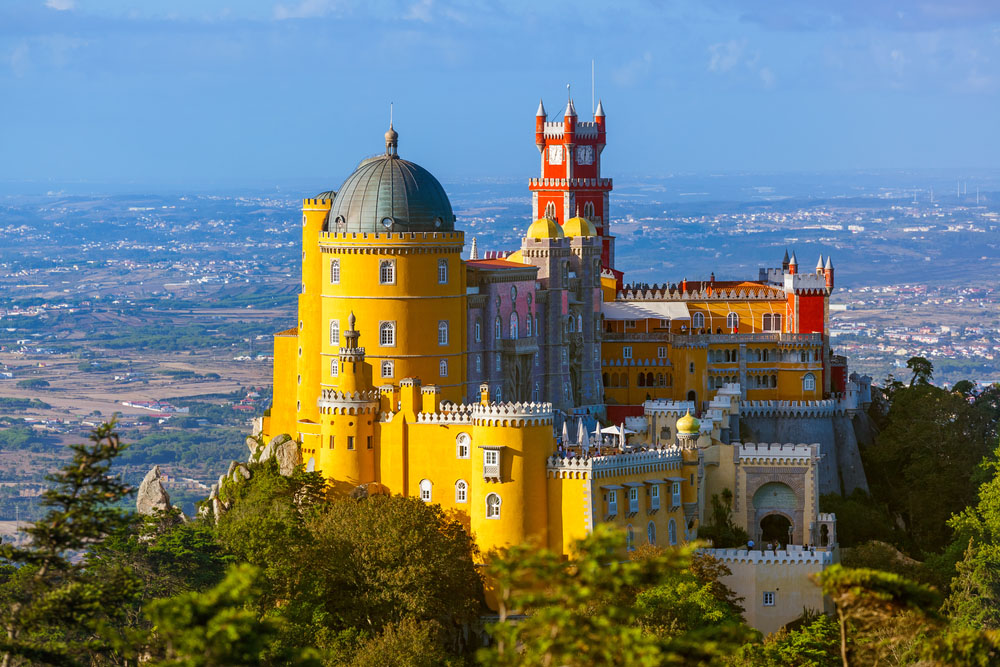 Castle of the Moors

Walk north through the forest from the Palácio da Pena and you’ll find the hilltop Castelo dos Mouros – the Castle of the Moors. Haunting and desolate, this ruined fortress could scarcely be more different from its extravagant neighbour, but it is just as affecting in its own way. Built by the Moors in the 8th century, this is a reminder that Sintra’s significance far predates the elaborate palaces for which it is famous today. It is also the place to come for the best views of Sintra, with the Palácio da Pena on one side and the picturesque manor houses of the old town on the other. 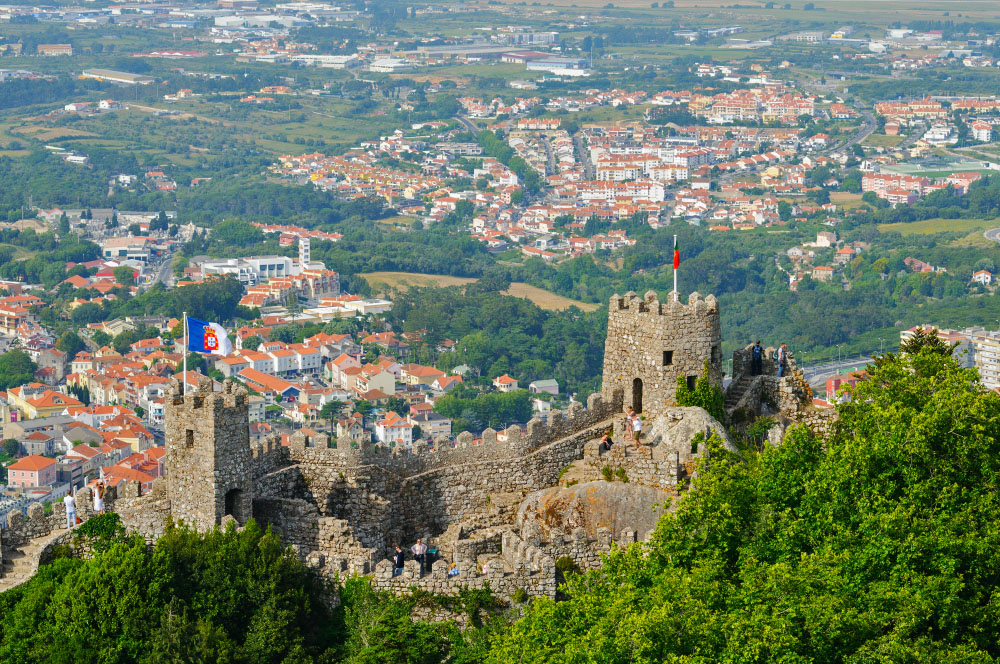 Unlikely as it may seem, there is one palace in Sintra even more flamboyant than the Palaçio da Pena: the Quinta da Regaleira, which sits in wooded gardens a short walk west of the town centre. Built in the early 20th century, the palace is a monument both to Portuguese history and to the interests of its owner, eccentric Brazilian millionaire António Augusto Carvalho Monteiro. The extravagant façade includes twisted ropes and seafaring instruments, delicately carved in stone – these motifs are common to the 16th-century Manueline style, which celebrated the achievements of Portuguese explorers during the Age of Discoveries. Alongside them are fantastical winged creatures, taken from the pages of alchemical texts, and other esoteric symbols said to refer to Freemasonry, Rosicrucianism and other secret societies. 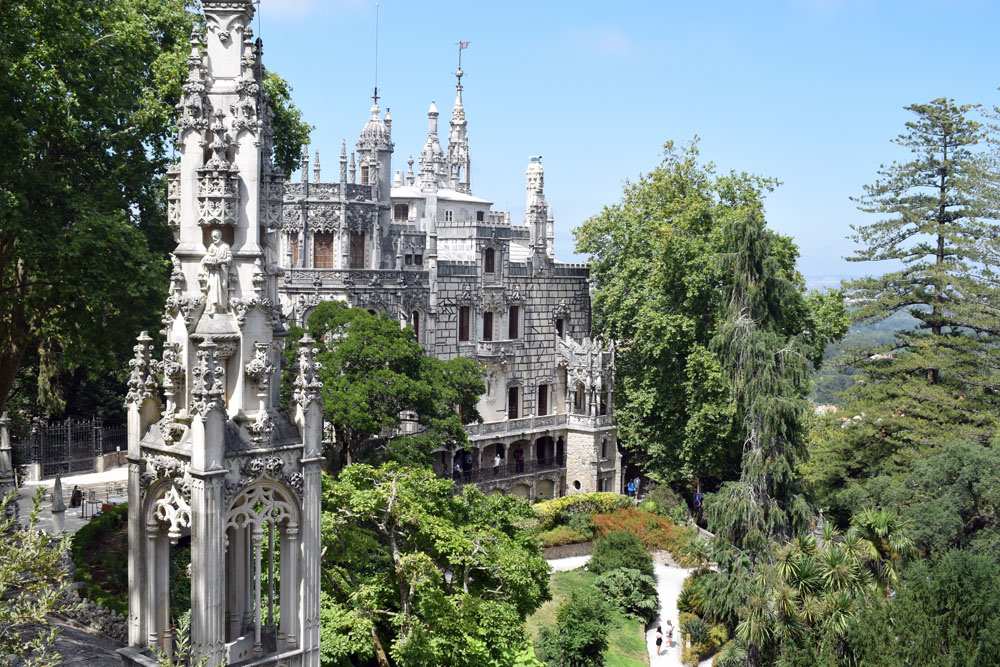 Here, too, among the soaring turrets and sneering gargoyles, is the square cross of the Knights Templar and its successor organisation, the Order of Christ. This storied band of warrior monks played a crucial part in the Portuguese Discoveries, which were funded partly from Templar coffers swollen with spoils from the Crusades. The great spearhead of the Discoveries, Prince Henry the Navigator, was himself Grand Master of the order, and their symbols adorn the Quinta da Regaleira as they do many other grand monuments in Portugal. The Templars were dissolved across much of Europe amid accusations of heresy and devil worship, and ever since their name has been a byword for the esoteric and the occult.

Monteiro envisioned the Quinta da Regaleira as a doorway between the physical and spiritual worlds. The grounds of the estate contain numerous grottoes and follies, connected by a warren of underground tunnels. These lead to two deep wells, circled by narrow staircases. One was left unfinished; the other, the so-called Initiation Well, spirals down towards a floor emblazoned with the Templar cross. It’s not known what purpose, if any, the wells served – but it is speculated that they were the sites of strange Masonic rituals. The rich symbolism of the Quinta da Regaleira is no doubt the work of men with an eye for the dramatic – it’s no coincidence that the palace's architect Luigi Manini moonlighted as a set designer – but it’s best seen as a love letter to the mystery and romance which have shrouded Sintra for centuries, and remain undimmed to this day. 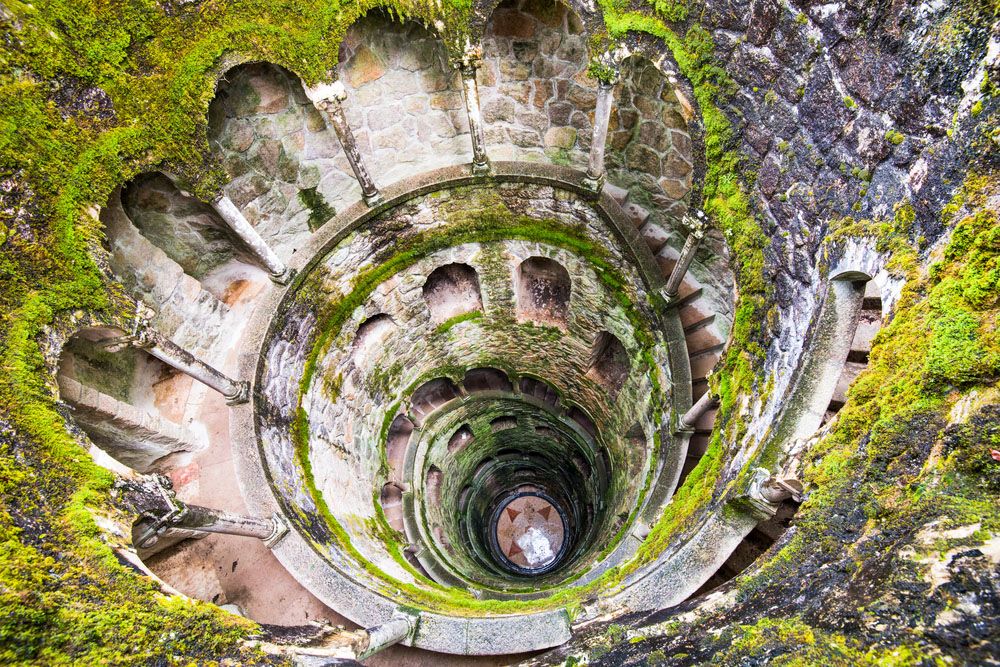 Those attributes have long enchanted visitors, and Richard Strauss was by no means the only artist enamoured of Sintra. Lord Byron wrote in his narrative poem Childe Harold’s Pilgrimage of 'Cintra’s glorious Eden' and likened it to the Elysian Fields of Greek mythology, while his contemporary Robert Southey declared it 'the most blessed spot on the whole inhabitable globe.' Most fitting of all, perhaps, is the praise of Hans Christian Andersen, a man who knew his way around a fairytale castle – he described Sintra as 'the most beautiful place in Portugal' – and it is certainly difficult to disagree.

Our local experts can organise fantastic trips in Portugal for you. To get started, simply get in touch to let us know your ideas for the trip and when you would like to travel. We will then create a personalised itinerary especially, which can be amended until you are completely happy with every detail before booking. You can browse our existing itineraries for inspiration, and keep in mind that all of our pre-planned itineraries can be fully tailored to suit your own specific requirements.

Our trip was fantastic! Transportation, accommodations, guides - all were well chosen! The hotels were well situated, well appointed and had helpful, friendly staff. All of the guides we had were very knowledgeable, patient, and flexible with our varied... Read more

The hotels were fabulous and we were greeted and treated with care. The itinerary proved outstanding. The drivers were wonderful. He was always on time, made changes to shift stops around to make the history more evolutionary and he was so knowledgeable about the history and included other very interesting facts. He made the vacation exceptional. We were just so pleased. I want to thank you and the team that made this so memorable for us. We fell in love withe Portugal thanks to you.